Since 1995, Coach has driven a white Geo Prism which is almost as famous as he is in Greenwood, Arkansas.  Fairly soon after the purchase, he hit a pothole and messed up the alignment.  Now, many years and tires later, with no hub caps, no power steering, a driver’s door that only opens from the outside, roll down windows, folded up papers stuck in numerous places to keep the rattles down, unexplainable smells, and a horrendous noise coming from under the hood, he is still driving it proudly.  Coach doubles the value of his car every time he fills it up with gas.

All 3 kids, Kevin, Regan, and Allyson, now have their learner’s permits.  Kevin will be the first official driver when he turns 16  today on July 1.  Good news,  he is just like his Dad and would proudly take over the Geo as long as he can call it  his own.  Last night, Kevin chose Fuji’s for his birthday dinner.  On the way, we discussed Kevin’s financial situation, which was a short discussion,  and the possibility of him buying the Geo for $500.  My response was to let him buy it for $400 and we skip Fuji’s and eat at home. Kevin was considering that offer, but as you might have guessed, Coach values food much more than his Geo so Kevin was not given that option.

This morning, we sent Kevin on a birthday present hunt. He had already  gotten some new and rather expensive shoes so expectations were very low, but he still wanted an electric guitar. His dream is to be a worship leader.  Each present led him to a new present with clues: 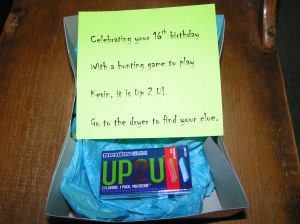 With a hunting game to play

Go to the dryer to find your clue. 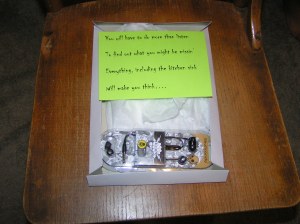 You will have to do more than listen

Everything, including the kitchen sink

Will make you think…..

We “picked” out something electrifying

That could be on the stove top frying

Dreams come true, there are no fools

Sometimes it just takes  all the right tools

Search high and low, at the end of your nose

In front of your face “time” and you will be close

Whatchamallcallit you have seen it before

Go to the coat closet and open the door

(Sorry, the candy bar got eaten before I could snap a picture!)

You are almost there, this holds the key

To everything you want to be

Not East, West, South, but North

Look with your eyes and go forth

Be strong and courageous.  Do not be afraid; do not be discouraged, for the Lord your God will be with you wherever you go.  Joshua 1:9